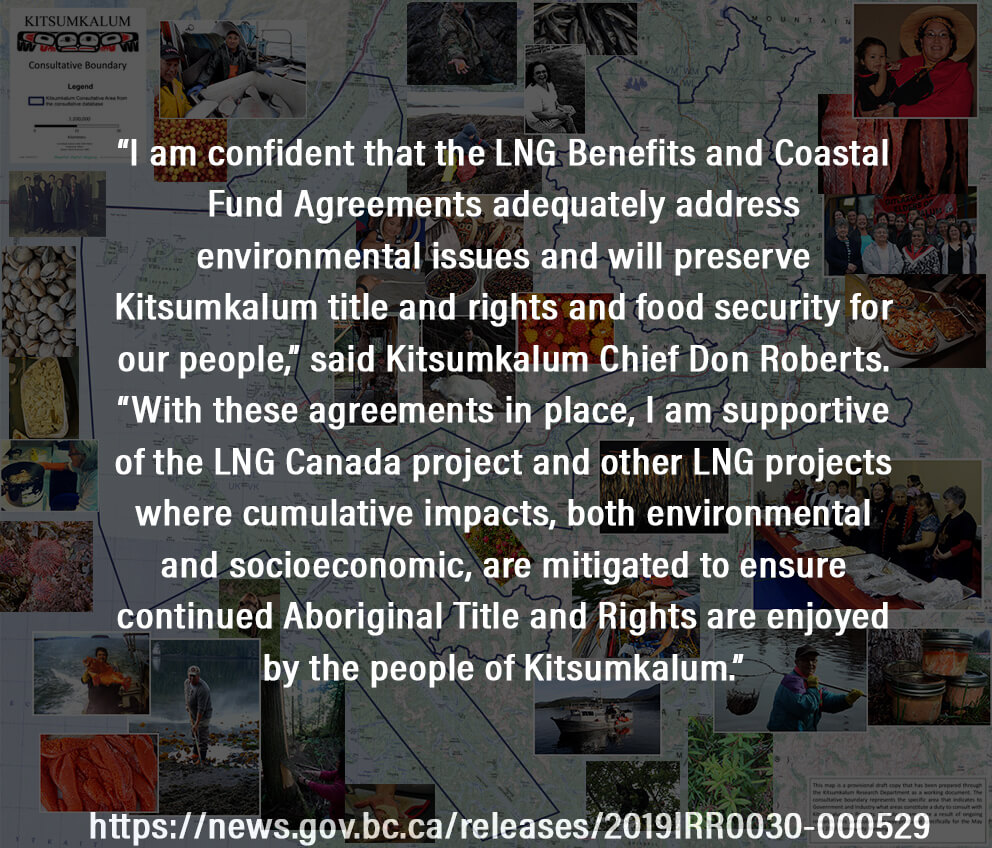 Kitsumkalum Chief and Council are confident that the LNG Benefits and the Coastal Fund Agreements adequately address environmental issues for the preservation of Kitsumkalum Title and Rights and food security for the people of Kitsumkalum and as such, are supportive of the LNG Canada Project and that it is also generally supportive of the other LNG Projects where cumulative impacts; environmental and socioeconomic are mitigated to ensure continued Aboriginal Title and Rights are enjoyed by the people of Kitsumkalum within their traditional tribal territories.

The LNG Impact Benefits Agreement and the LNG Coastal Funds Agreement enables Kitsumkalum to actively participate in and monitor environmental activity and proposed activities resulting from the LNG Canada project in Kitimat or any other LNG project which take place in the Douglas Channel area in the future.  It is important that Kitsumkalum can play a direct and important role in overseeing any industrial and environmental impacts that can affect the Kitsumkalum Traditional Territories on the coast.

These agreements with British Columbia also gives us direct cash and economic benefits related to the LNG Canada project to be constructed in Haisla territory.  It gives us tangible benefits and opportunities which can benefit the priorities of Kitsumkalum for many years into the future.

The people of Kitsumkalum have continued their sustenance from the resources in their traditional territories and have maintained their livelihood through two sunset industries; the commercial fishing industry and the logging industry and now find it necessary to learn new skills to fit into a changing labour force from a manual labour force to a specialized trade’s workforce with heightened levels of regulatory oversight.

These agreements will bring training and employment opportunities to the people of Kitsumkalum to prepare them for a changing labour force over the next five years as well as funding to upgrade Kitsumkalum’s aging infrastructure.

Kitsumkalum views this as a land and economic development fund which will provide an early annual base amount plus additional annual funds once the LNG Canada facility starts operations.  Kitsumkalum will receive over $20 million over the next four years and then annual payments over the life of the project, which is expected to be a forty year operation that will bring benefits to the people of Kitsumkalum for many years.

Link to: Kitsumkalum to share in LNG benefits after agreements reached with B.C. Announcement

Link to Kitsumkalum to share in LNG benefits after agreements reached with B.C. Announcement

Link to: 2014 Kitsumkalum’s Strength of Claim to the Coast: https://kitsumkalum.com/no-permission-required-title-and-rights-in-the-traditional-territory-of-the-kitsumkalum-indian-band-october-22-2014-by-eric-wolfhard/