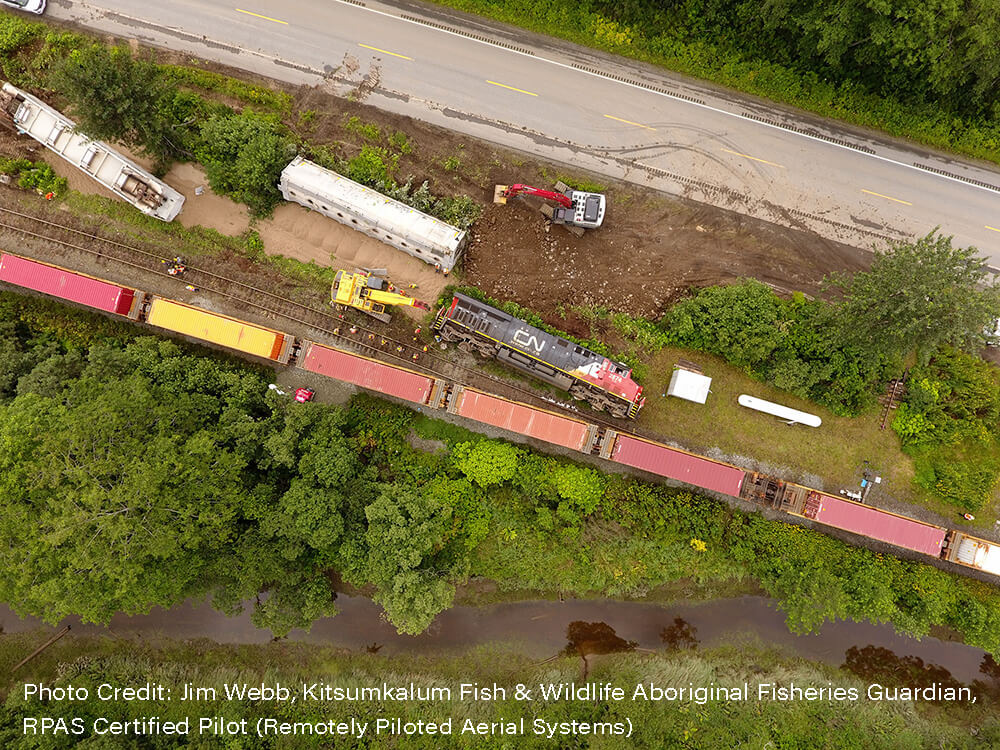 (June 17, 2019) Kitsumkalum BC —-A CNR derailment was reported yesterday evening located 50 miles west of Terrace near the old Kwinitsa rail station. There were three cargo trains that derailed including the head engine train which was full of wood pellets. No one from the public was impacted and only minor injuries to CN crew were reported.

No details have been released yet as to why and how the incident occurred. Environmental impacts are still being investigated but seemed to be minor in nature.

“We were notified quickly by CN about the derailment which was located within Kitsumkalum’s territory. We mobilized our team to observe the incident and were able to monitor the derailment and consult with the environmental crews that were already in place by CN. It looks like it would have minor impacts to the environment so we are relieved. We are working towards collaborating more closely with CN in the future by ensuring that our own environmental teams are in place. It’s important to look at derailments, no matter how minor, from the perspective of First Nations. It just means more experts and knowledge that will be applied to incidents like this which means healthier outcomes for our fish, land and wildlife. It’s about protecting our natural resources and the more resources we have the more success we will have in responding quickly. ” says Kitsumkalum Chief Don Roberts.

Earlier in July, Kitsumkalum had started on conducting a spill response project that will result in the development of a Geographical Emergency Spill Response Strategy.  The study will continue through the summer and the next study will occur mid-August. In the event that a derailment occurs causing more serious environmental impacts, Kitsumkalum will be a first responder and have the ability to mobilize areas that are considered sensitive fish habitats.