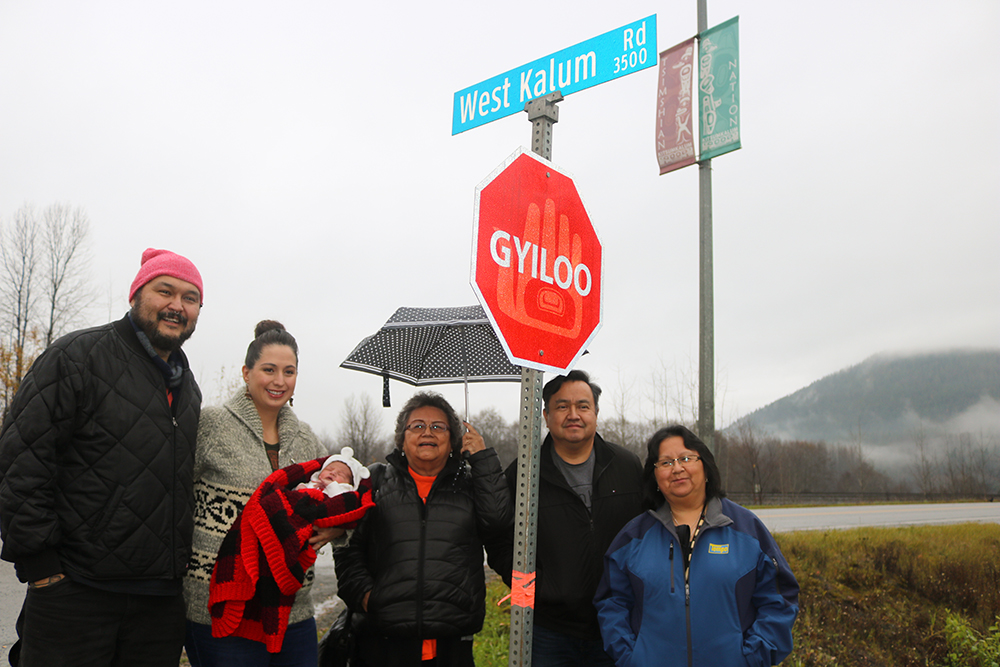 Thanks to grant funding from the First People’s Cultural Council, Kitsumkalum has plans for more signs within the community.

Kitsumkalum of the Tsimshian Nation is installing stop signs in Sm’algyax as a way to promote their traditional language. Listening to community feedback from the Comprehensive Community Planning process, community members put forward they want to learn their traditional language. From that direction Kitsumkalum has been applying for funding for community language classes, signs, classroom resources for their school, learning guides, resources to share online and to publish a book started by community elder and fluent speaker, the late Mildred Roberts.

“Aunty Mildred was a strong language advocate, she was a fluent speaker and was one of the first leads that worked hard to revive the usage of Sm’algyax, she wrote books, songs, did what she could to help us learn our language,” says Heather Bohn, Kitsumkalum Communications Coordinator and Sm’algyax language learner.

Indigenous languages like Sm’algyax were actively suppressed by the Canadian government through the residential school system and Indian day schools, where many children were punished for speaking their own language.

“I grew up hearing my late mother, Victoria Roberts talk to her siblings on the phone speaking our language, it always sounded so incredible, but my mother would not speak to us in Sm’algyax. Later in life, I asked her why she never taught us and she said she didn’t want us to go through what she did at Indian Day School in Spa Xksuutks (Port Essington), so she was obviously scarred from what happened there,” says Cynthia Bohn, Kitsumkalum Band Councilor and Sm’algyax language learner.

Kitsumkalum now has community language classes and is working with Sm Łoodm ’Nüüsm, Dr. Mique’l Dangeli, PhD and community elders to help lead the classes, although language classes are on break at the moment while Sm Łoodm ’Nüüsm is on maternity leave. “It’s exciting to see that the next generation will be growing up hearing and seeing our language, we want to normalize our language, and this is just a small step.” Sm Łoodm ’Nüüsm’s husband, Goothl Ts’imilx (Nisga’a Name),  Teettlien (Tlingit name), Mike Dangeli carver and artist provided the form line design to Kitsumkalum to be used with the stop sign.

Starting with a stop sign is a small idea and is something that many other communities have already done in their own indigenous language, it’s one easy way that you can learn one word that doesn’t need to be translated.